To introduce all firefighting in Fukui Prefecture for the hearing impaired 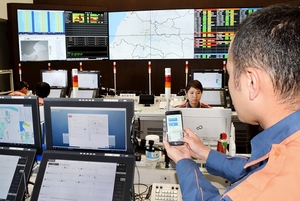 The Fukui City Fire Department in Fukui Prefecture, which operates a system that allows people with hearing and language impairments to report 119 without using voice from the screen of a smartphone or mobile phone, will promote its use on November 9. Demonstration for the news media. This system will be introduced by all fire departments in the prefecture by next year. There is also an introduction of services that support multilingual 119 calls, and we hope to be able to respond quickly to disasters by using various reporting methods.

“NET119 emergency call system” requires pre-registration such as address and name. Select items related to notification such as “Ambulance”, “Fire” and current location on the screen of the terminal. A mechanism to convey the detailed situation. Fukui City Fire Department was introduced last April. As of November 8, 109 people have registered, but there is no actual use yet.

】 In the demonstration held at the City Fire Department on this day, the firefighters who received a report from the smartphone confirmed the situation by chat. Information was quickly obtained from the whistleblower using fixed phrases such as “Are you sick or injured?” Or “Why is it hard?”

On the other hand, the multilingual interpreter service responds to 119 calls from foreigners who do not speak Japanese, and when there is a call, a three-party simultaneous call with a private call center interpreter is performed. The City Fire Department was introduced in April last year and supports 14 languages ​​including English, Chinese and Vietnamese. There were no reports, but there were 6 cases where interpretation was necessary after arrival at the site.

The demonstration assumes a report from a man complaining of severe stomachache from a shopping center parking lot. The information on the buildings that can be seen in the surrounding area and the car in which they were riding was obtained through interpretation.

“Yuki Hayashi, Commander of the Fire Department, City Fire Bureau Control Department, said,“ I want to make it easier for foreigners and foreigners to live in Fukui with peace of mind ”regarding the two reporting methods.

For inquiries regarding pre-registration of "NET119-", City Fire Department Control Section = Telephone 0776 [20] 3999. “NET119-” is also operated by the Kanie / Nyu Fire Fighting Association in the prefecture.

<Full view report> The prefectural office is in the season of personnel affairs Deputy governor, superintendent of education, etc. retired

'Health and Nature Sustainability Are Connected'

40 years of embassy occupation: How Washington and Tehran became enemies